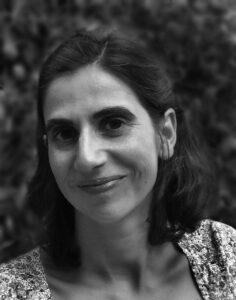 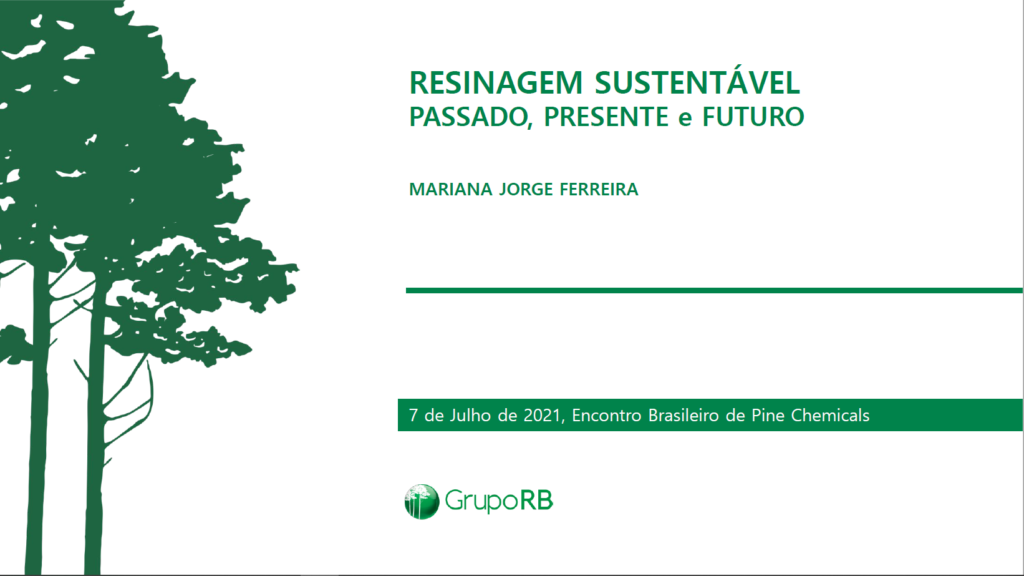 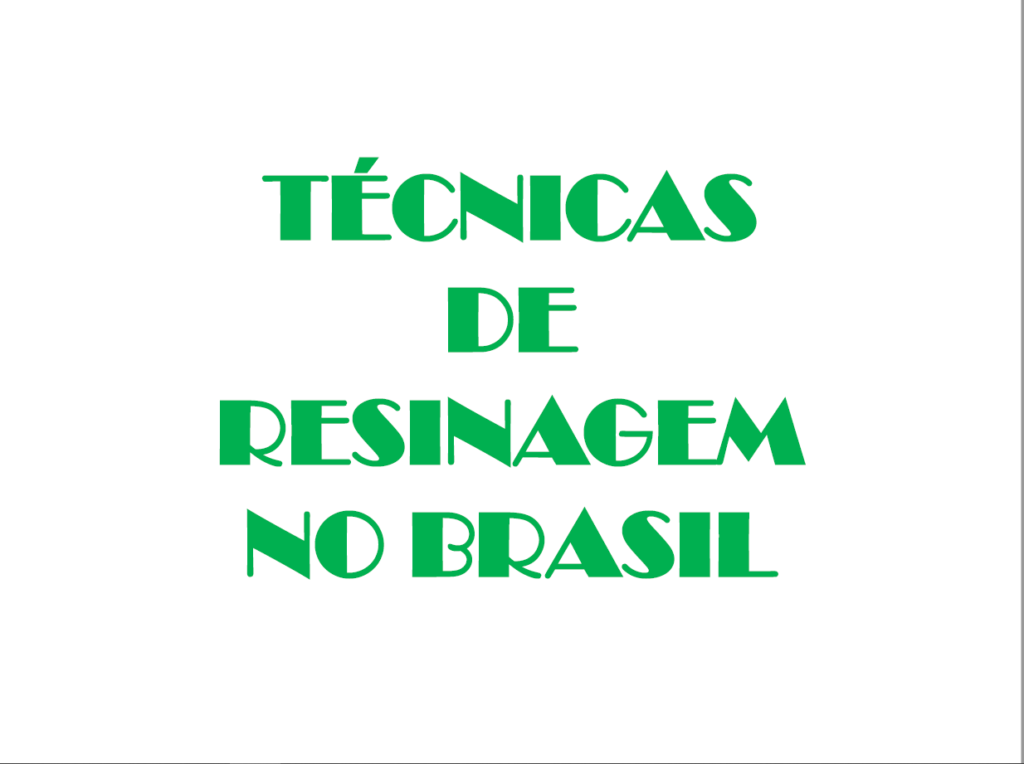 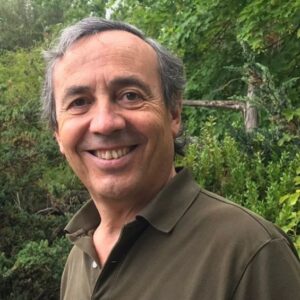 Álvaro Picardo Nieto, forester, born in Madrid (Spain) in 1961. He works as Technical Adviser to the General Direction in Natural Heritage and Forest Policy of the regional government Junta de Castilla y León (Spain). His main activities include participation in the drafting of the Castilla y León Forestry Law and in the main forest policy instruments of the region, such as the Forestry Plan, the Bioenergy Plan or the Forest Resources Mobilization Program. He has also developed his activity in the international arena, within the framework of the Standing Forestry Committee of the European Commission, the International Model Forest Network and various forestry cooperation and innovation projects, in collaboration with the CESEFOR foundation, of which he was President between 2015 and 2018. He has taken part in several H2020 projects, like ROSEWOOD and INCREDIBLE, with a large involvement in the promotion of Non Timber Forest Products, like resin, wild mushrooms, pine nuts and others. Since 2005 ha has participated in the regional program on pine resins of Junta de Castilla y León.

Between 2000 and 2004 he was Head of the Forest Management Service of Junta de Castilla y León and before that date he worked as district forester in charge of public forests management for 12 years, in the provinces of Burgos and León. He has a Forestry Degree from Polytechnic University of Madrid and a Master of Sciences degree on Natural Resources from the University of California at Berkeley. 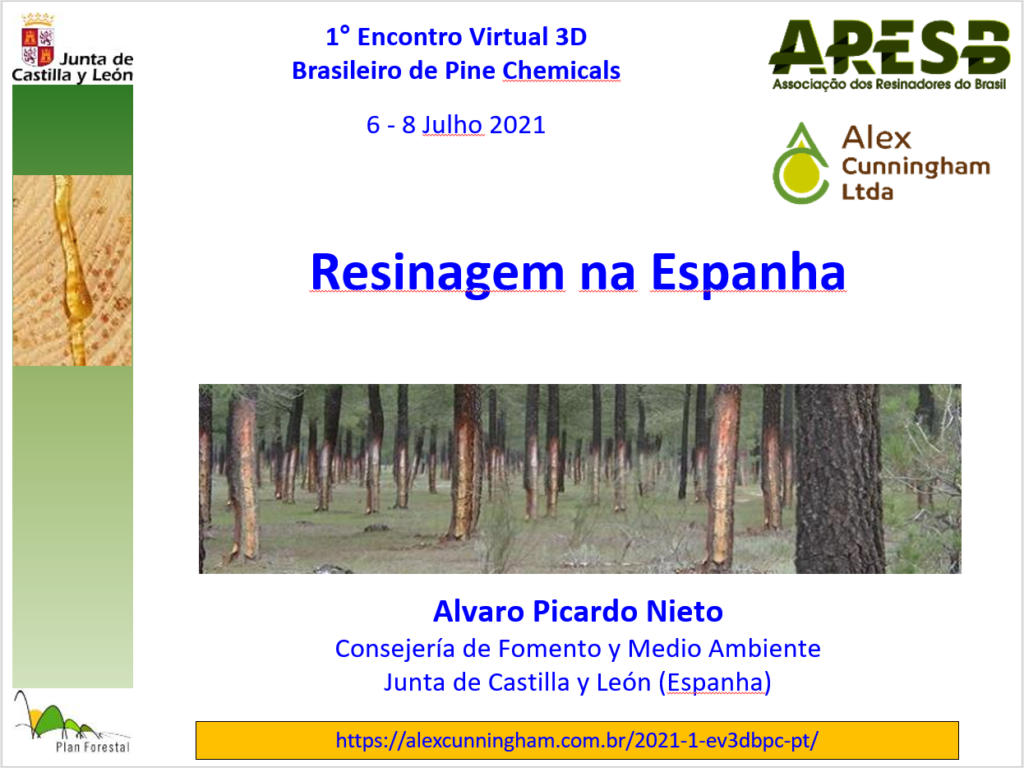 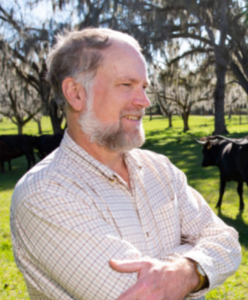 Alan W. Hodges is an Extension Scientist Emeritus at the University of Florida-Institute of Food & Agricultural Sciences, Food & Resource Economics Department, where he worked for 34 years until his retirement in 2019. He is an affiliate faculty member in the UF School of Forest Resources and Conservation. He received Master’s and Doctoral degrees in Agricultural and Biological Engineering from the University of Florida, and a Bachelor’s degree from the University of Chicago. His areas of research include regional economic impact analysis, market survey research, agribusiness management, and biomass resource development. He serves as Extension Coordinator in Food and Resource Economics and Director of the UF Economic Impact Analysis Program, which conducts sponsored projects for industry organizations and government agencies encompassing a wide range of agribusiness and natural resource activities. During the 1990s and early 2000s he developed the borehole oleoresin tapping system as a labor-saving alternative to the conventional pine tapping system and has conducted international projects to commercialize this technology. He served as editor of the Forest Chemicals Review industry trade magazine from 1997 to 2006. He is currently involved with the Chester Skinner Turpentine Education Center at the University of Florida’s Austin Cary Forest. His family were involved in the turpentine industry in the Jacksonville area. He lives on a small farm in eastern Alachua County, Florida.

Abstract – Pine Oleoresin Borehole Tapping – Alan W. Hodges. This presentation reviews the technique, feasibility, and recent research on borehole tapping of pine oleoresin as an alternative to conventional open-face tapping. The borehole tapping method was originally developed in the early 1900s, and then rediscovered in the 1990s. The process entails drilling holes 2.5 to 3.8 cm diameter and 10-20 cm depth at the base of the tree, application of stimulant chemicals, and installation of a sealed plastic bag collection apparatus. A key feature of the system is that volatile terpene compounds are retained within the collection container, and the desiccating effects of the atmosphere are eliminated, thereby maintaining oleoresin flow for up to four months. The method is suitable for Pinus elliottii and a few other pine species, on trees 18+ cm diameter. Trees may be tapped repeatedly over several years or at 3-4 month intervals, though yields may be reduced from the first tapping. Borehole tapping has advantages of higher product quality, reduced product losses, increased yield per labor man-hour, reduced timber damage, and lower incidence of pest attack. Average oleoresin yields from borehole tapping range from 1 to 2.5 kg per tree, depending upon number and size of boreholes, chemical treatment levels, treatment quality, tree size, vigor, and genetics. Recent research on improved chemical stimulants found that Methyl-Jasmonate significantly increased yields. Mechanized systems for borehole tapping have been developed to reduce labor costs. Tapping rates of over 200 trees per hour have been achieved in commercial operations in the U.S. Production costs from mechanized tapping are around $1-$2 per tree or $1.20 per kg of oleoresin. An automated robotic tapping system is being developed under a business innovation grant. Very large resources of Pinus elliottii are available for tapping in its native range in the southeastern U.S. coastal plain, and in many other locations around the world where it has been planted. According to the USDA Forest Service, in 2013 there were over 780 million live trees suitable for tapping in the U.S., including 66% in planted stands that are efficient for tapping. Sustainable annual production of 80,000 metric tonnes could be achieved based on expected oleoresin yields for trees tapped two years in U.S. counties with at least two million trees, and assuming a 20-year plantation turnover rate. 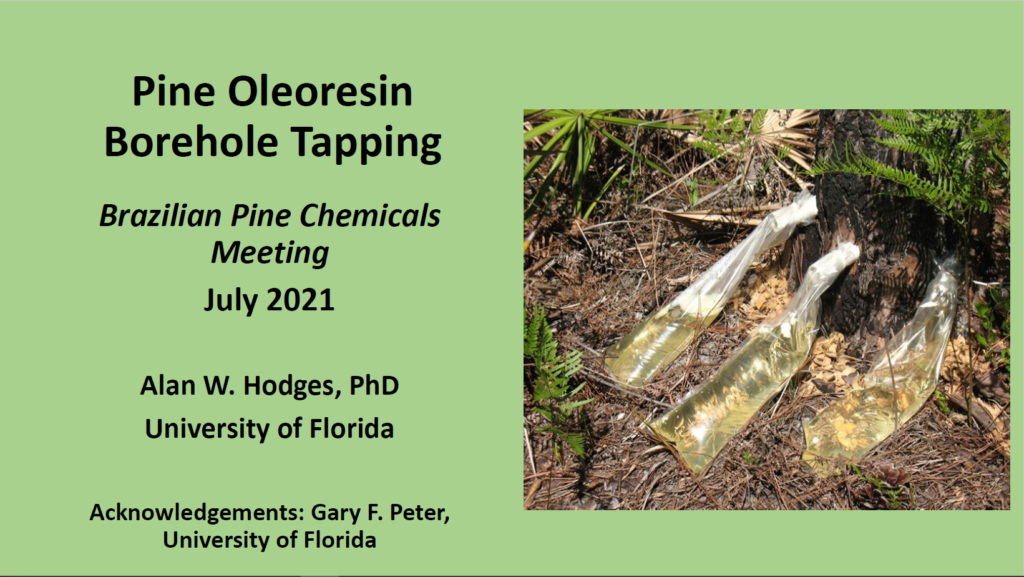 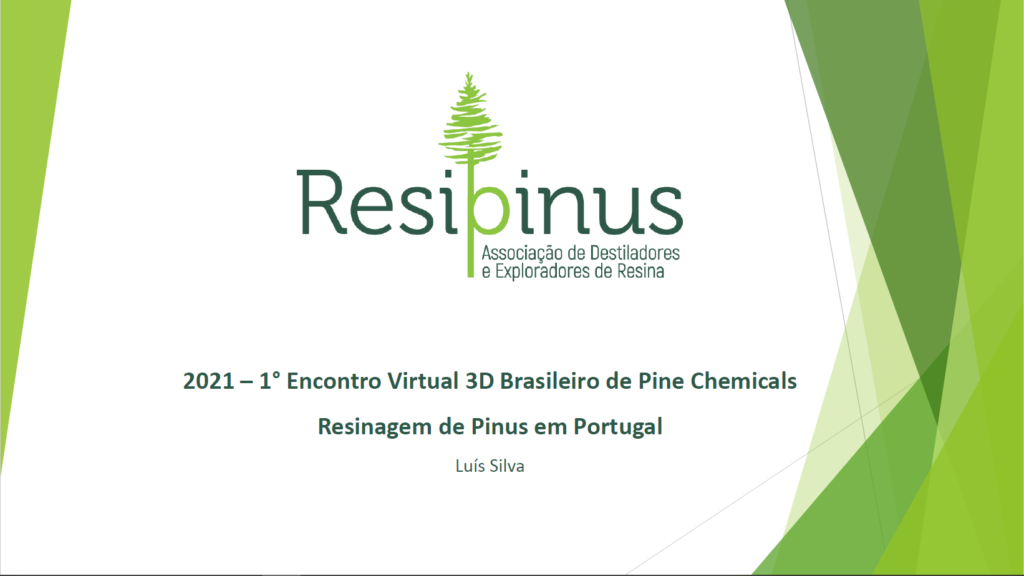 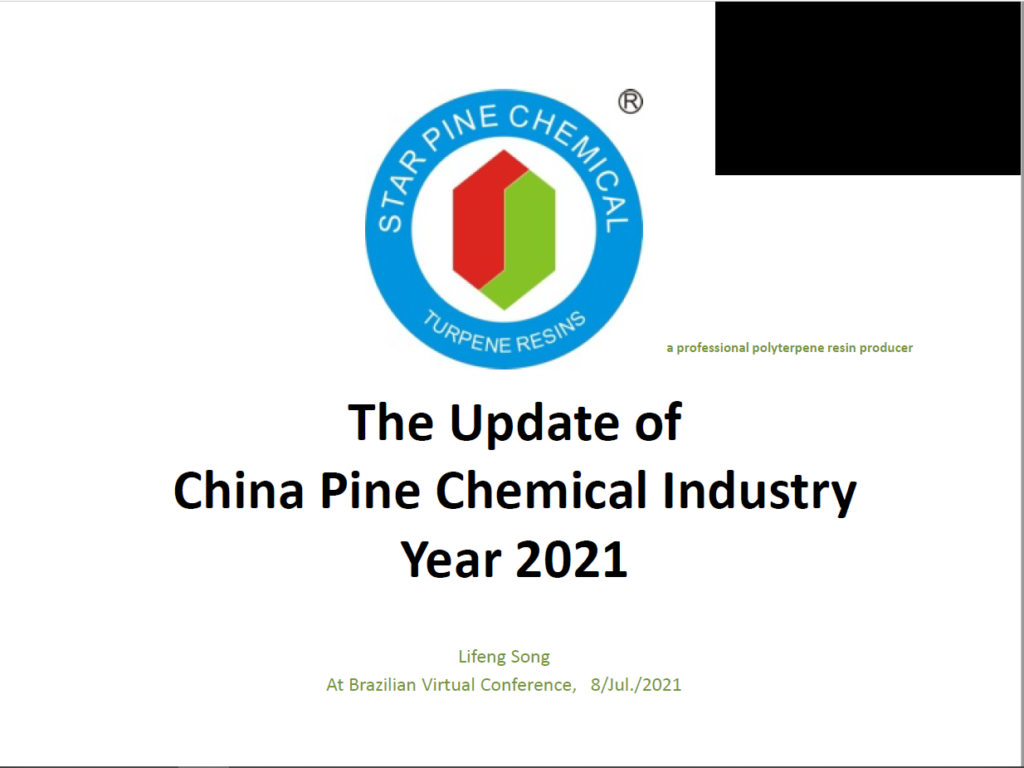 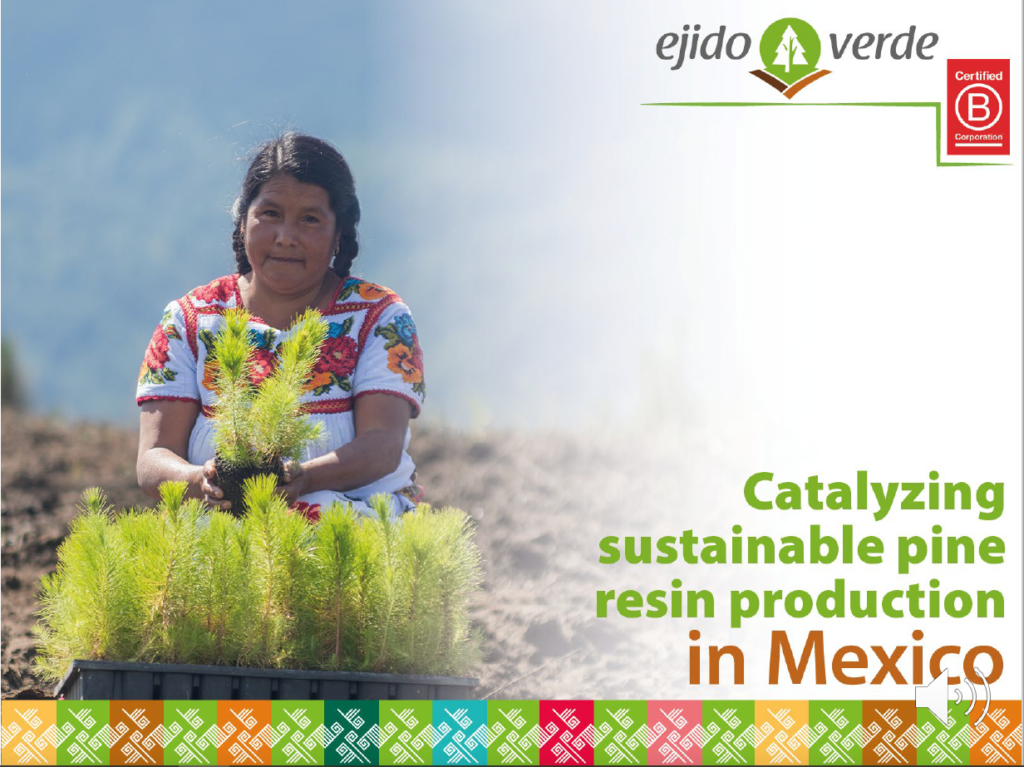